When I started working on Hack Grid, I knew it was going to be a 2D puzzle game where you play on 4×4 board. The objective of each level is to clear the pieces. I knew that the puzzle aspect will come from the kind of pieces, their ruleset and how they are positioned in each level. Every 10 levels, a new piece with a new ruleset is added, which will change how the puzzles will be solved.

This allowed me to plan accordingly and estimate how much work and time my game will take to finish. Of course, during the development I made few changes and additions. The clear goal and small scope helped me to avoid feature creep, because I knew what I was aiming for.

I’m a visual person, when I think of ideas for games, I imagine how it looks and how it plays. Art is my weakest side, but I am a solo dev and I don’t like using pre-made assets.
Pre-made assets have different art styles and there’s no guarantee someone already made what I want and need.

First of all, I jumped into my drawing program PyxelEdit and I create mock ups.
I was going both for something visually pleasant and that I can handle making. 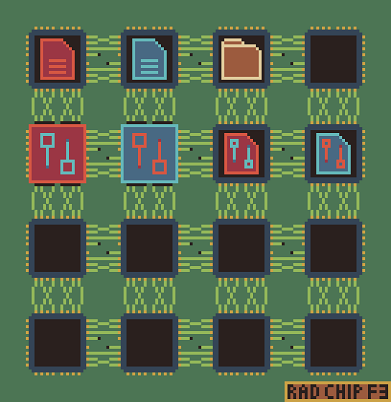 This is the first mock up I made. Hack Grid has an abstract hacking theme.
I loved the idea of having a circuit board and the pieces being representation of files and physical parts of the board. After all, how do you hack something? Through malicious files that can even allow you to control the physical components of the computer.

It doesn’t take too long to realize that this is not a very good look for the game.
It’s messy and hard to look at. I tried sticking with it for a bit, wondering if it will look good when the pieces actually move, but the answer was no.

I asked myself why exactly it doesn’t work
1) It’s too busy, there’s too much stuff going on in the background.
2) The pieces are inconsistent. Some are inside the squares, some go outside of it.
3) Too many colors

I’m sure a better artist could make it work, but my skill isn’t there yet, so I gave up on it.

Back to the drawing board

I have good experience with erasing all progress if I can’t get it to work and starting from zero again. I knew I needed something more simple and abstract. My mind makes connections in strange ways, so I started thinking what I could use as an inspiration.

BIOS! That’s right, BIOS has a very simple style and it makes me think of MS-DOS!
That’s when it clicked and I knew I wanted Hack Grid to have a DOS-inspired style.

I went back to PyxelEdit and starting drawing again. 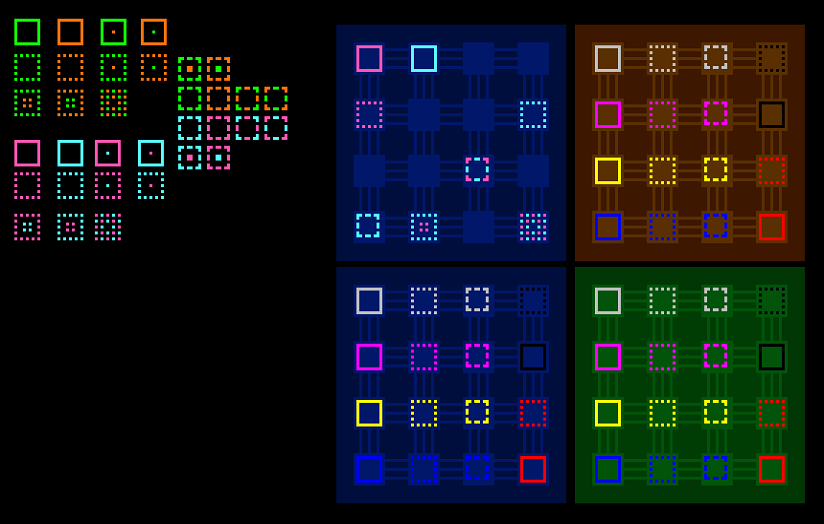 This is much closer to what the final game looks like.
I did settle on the cyan and pink look for the pieces, the other colors were just too bright and uncomfortable to look at.

After I knew what color palette I was gonna use for the game, I started drawing all kind of shapes for the pieces. I decided to draw them in 11×11 (I like having middle in my art).
Each piece needed to have a unique and distinct look, so that the player can tell them apart easily.

I did a good job, even if I say so myself.
The pieces are easily recognizable and the colors are stylish!

Designing for the players

I asked myself, what will happen, if the player takes a break for a week and comes back?
Will the player remember the pieces? What happens if not?
Therefore I added the toggleable window on the left, which shows the piece and its rules.

Every 10 levels, I add a new piece, which results in a new game mechanic.
I wanted to make sure that it’s as easy as possible for the player to learn and remember the new ruleset.

So the first level with a new piece has a very simple solution.
It teaches you how the pieces work. 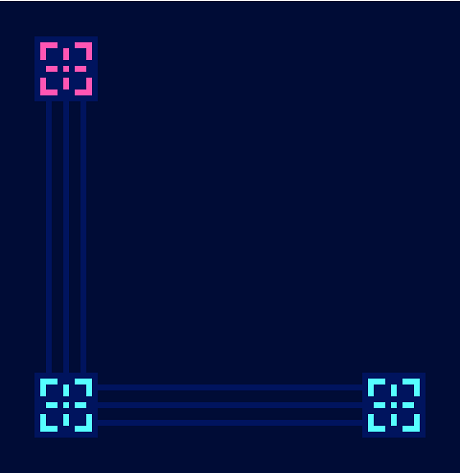 This is the board of the very first level. All of these pieces can move, however they have to follow the trail and can only move on differently colored pieces. This level has only one solution, if you make the wrong move – which is possible, you won’t be able to finish the level.

It’s short, sweet and if you end up making the wrong move,
correcting that mistake is a matter of seconds.

So how do you correct your mistakes? Well, you can undo your last move or you can restart the level entirely. Only half of my beta testers used the undo function, since the biggest levels are 4×4, you won’t lose too much time restarting, but I myself find that feature useful when I make a silly mistake or misclick.

That’s an important thing to keep in mind, people will not play your game perfectly. They will make mistakes and they will misclick, keep that in mind.

In the later stage of development, I started focusing on the audio.
I had an idea, that I want my game to sound like the DOS and early Win95 gaming I remember.
Which means, I wanted it to sound like Sound Blaster!

Luckily for me, I found a soundfont that simulates Sound Blaster 16. Thank god for LMMS Studio, it’s such an easy DAW to use even if you’re a total beginner like me when it comes to music composition.

It really added to the DOS feel of the game.
I went one step further and added a CRT Shader!

I’m not sure how I feel about my decision to add localization to the game.
It took an extra week of a development and cost me a lot of energy and nerves, it wasn’t pleasant.

Especially Hindi and Russian localization. The font I used didn’t support their scripts, so I made the game switch between fonts and re-adjust positions of texts.

The game releases on Steam 26th of February, so we’ll see how many players will use the other languages, considering the amount of time, work and energy it took and that Hack Grid is a very simple game with no story, I am inclined to say it wasn’t worth it.

Choose to what feedback you listen to

Last thing I want to mention is you have to be careful about the feedback you work with. Have your game play tested, at least by few select friends. You will not avoid tunnel vision if only you playtest your own game. Always ask yourself, if a change or a new feature that is suggested is worth your time.

One of my friends isn’t a fan of how you have to drag the mouse to move the pieces.
He suggested that I add an alternative way of controlling the game, where you click on a piece and then click on a piece onto which you want to move it.
I didn’t end up doing this, because the entire game logic was written for mouse dragging.

I could have added it, despite of the noticeable time cost, would it be worth my time?
Is this a feature that will make people buy the game? No, not really, so I didn’t do it
and it was the right call.

Thank you for reading all the way to the end!
Hack Grid is releasing 26th February 2021 on Steam.
You can support me by wish listing Hack Grid on Steam